I’ve recently had some very sweet, concerned emails from a few readers of my blog asking why I hadn’t posted anything here since March. People have been very kind but the reason for my being so uncharacteristically quiet here is because I’ve been recovering from an accident while out mudlarking. This is the first opportunity I’ve had to sit down at the old laptop and write my latest blog.

Before I terrify prospective mudlarks out there I’d just like to reassure everyone that the accident was NOT sustained while actually mudlarking on the Thames Foreshore, but rather as a result of a freak incident that occurred as I was actually sitting half way up some stone steps leading away from the foreshore, literally having packed my rucksack with finds ready to head off for a coffee and then to the station to catch the train home.

Ironically, it had been a good mudlarking session. There were quite a few other mudlarks and detectorists about as the weather was good, mild and sunny initially, with a reasonable low tide, and it wasn’t long before I made my first significant find, see the photo below. A very pretty Georgian (18th Century) pewter button with a triple heart design engraved on it. Holding it in my hand I was struck by the thought, as always, that I was the first person to touch this button since the individual who lost it in the Thames all those centuries ago. They’d have been really annoyed at doing so as the button would have been expensive and not easy to replace. Also, I can’t rule out that the heart design may have had some personal meaning to the owner so it made the find particularly special. 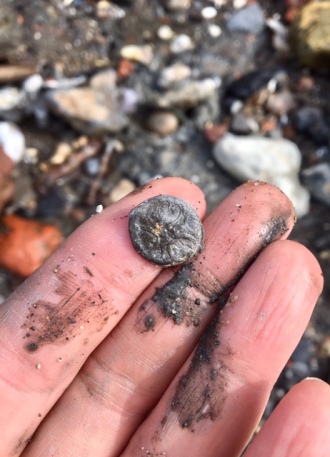 In fact that morning’s mudlarking session was full of haberdashery finds from the past. In addition to the Georgian pewter button I also found hooks, 16th – 17th Century brass aglets (bottom right of the photo below) which are the metal tubes found at the end of shoelaces to stop them from fraying, (some aglets are beautifully engraved) and a nice stash of brass dress pins. These can be difficult to date but are roughly from the 14th to 17th Century, and were used by both men and women to pin their clothing together at a time when buttons were rare or too expensive unless you were a high status individual. Dress pins are a bit of an obsession of mine and I’ll be doing a separate, more detailed blog about them later in the year, but what I’ve noticed about my recent mudlarking finds is the golden state in which they’re currently coming out of the mud, almost as fresh as the day they became loose from someone’s garment hundreds of years ago. Pin finds are fairly ubiquitous on the Thames Foreshore and when you’ve been mudlarking for a while there’s a tendency not to pick them up any more, or perhaps only the bigger ones, but if I see them, whatever their size, inevitably they end up coming home with me.

As the tide was starting to come in I made my way off the foreshore up a flight of stone steps and started to pack my finds away in my mud-encrusted rucksack. I’m still not quite sure what happened next but, sitting down on a step to check some of the photos I’d taken, I put my mobile phone back in my pocket and somehow ended up kicking my rucksack down the stairs. I should have just let it fall to the bottom. The tide was coming in, though not completely in, and I could have simply walked back down the stairs, picked the bag up and then walked safely back up to the top. Instead, I instinctively lunged for the rucksack as I saw it falling. In that split second I ended up falling too, head first, arms flailing, trying to grab hold of some railings as I lost my balance and in a moment of panic using my left leg as a break.

This stopped me from falling further down the stone steps but in the process I knew I’d hurt my left leg quite badly. I saved my bag and myself from pitching down to the foreshore but the pain in the leg left me under no illusion that I wasn’t going to be able to get home without help and I couldn’t be sure I hadn’t fractured a bone. When I’d got my breath back I tried to straighten my leg but couldn’t, every move was extremely painful and there was no way I could put my weight on that leg. It was very frightening and I had no choice but to call 999 for an ambulance which took me straight to St Thomas’s A and E. I’m hugely grateful to the two young women who saw I was in distress on the stairs, came to ask if I was ok and stayed with me till the ambulance came. The kindness of strangers. 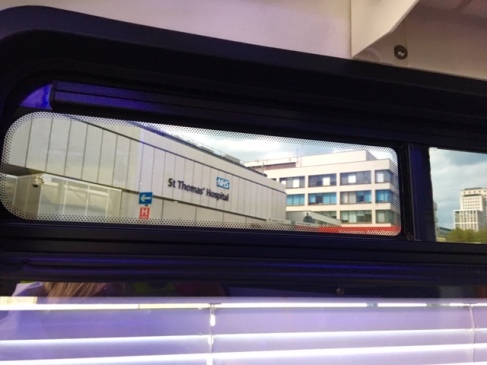 This was a day of new experiences, not least my first time in the back of an ambulance. London looks very different when you’re lying on a bed in the back of one speeding past iconic London landmarks, inhaling gas and air while trying not to scream. I don’t remember much of the ambulance journey other than one of the crew asking me what mudlarking was and trying to distract me by asking me to describe what I’d found that day. I don’t know what she made of me jabbering on about different kinds of Roman pottery as I don’t think I was making any sense at all. Bless her for showing an interest though and not making me feel like a complete twat. There’s always that sense of guilt that ambulances are for people who’ve had heart attacks or seizures, not for those who end up having freak accidents on the Thames Foreshore, but the ambulance crew were quite clear to me that I shouldn’t be feeling like that. Accidents happen and their job is to assess and assist injured people, regardless of the circumstances.

A and E was packed to the gills as it was the day after a Bank Holiday, but I can’t praise highly enough the kindness and professionalism of NHS staff who treated me. X-rays done, mercifully no bones fractured, and a final diagnosis of torn lateral quad muscles. The left leg was put in a support bandage, I was supplied with more pain relief, a crutch, told to rest for a few days and given a leaflet advising sets of specific exercises to do at home, then finally discharged six hours later and my anxious family were able to take me home. 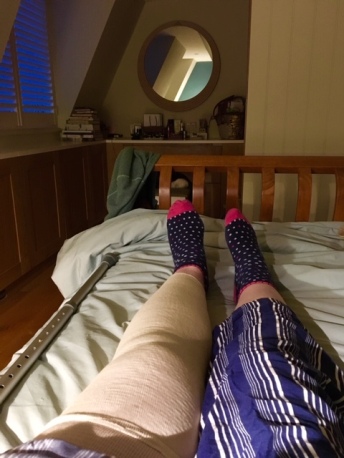 Later that night, safely back home, I was initially unsure about posting details of my accident on social media, or even blogging about it like I am now. But I’m glad I did as not only have I had wonderful ‘get well soon’ messages from the mudlarking community but I’ve had many mudlarks contacting me with their own personal horror stories of accidents or near accidents on the foreshore. Some of these have been quite terrifying; falls down ladders resulting in a broken rib or two, getting stuck in mud and twisting an ankle trying to extricate legs from the gloop, slipping on the green algae that often covers steps down to the foreshore, and mudlarks being impaled on bits of sharp and rusting metal. Many of those who contacted me told me that this was the first time they’d shared their scare stories, and my accident was a reminder for us all to be more careful when we’re out and about by the river.

I don’t want to frighten anyone with these horror stories but I think what my accident has done is to make me pause, reflect and think. Mudlarking is a wonderful thing to do but perhaps when you’ve been mudlarking for a while you become a bit lax, even casual, with your personal safety. Whereas my accident was a freak one that could have happened anywhere, it reinforced the fact that there are risks, albeit ones that can be managed, when you’re out and about searching for finds. So perhaps it’s timely to finish this blog by just reminding readers of some basic health and safety rules when mudlarking:

• make sure you have a fully charged phone with you – I spend a lot of time filming and photographing finds for my blog and other social media accounts; it’s far too easy to end up with very little charge left, which isn’t helpful if you need to make an emergency call

• If I’m honest, I don’t really like mudlarking with other people, much preferring to mudlark on my own. Nothing personal, but it’s valuable time to myself and as I potter about I know that I only have responsibility for myself. However, I do go out with other mudlarking friends, especially to a more isolated area of the foreshore or somewhere that I’ve never visited before. There is strength in numbers and if you do get into difficulties in an unfamiliar place then it’s comforting to know there is someone with you and you’re not alone. There’s no point in mudlarking if you’re going to be worrying all the time so, if you’re new to this, take a friend with you

• I often recommend the Thames Discovery Programme (TDP) to people who are new to mudlarking and advise they sign themselves up for a guided foreshore tour. These are inexpensive, safe and the perfect way to familiarise yourself with the river. TDP are primarily an organisation whose main role is to monitor and record the archaeology of the foreshore, not mudlarks as such, but most of their tours end with a bit of mudlarking allowed and then identification of finds by the tour leader that day. You can find TDP contact details in the ‘Advice’ section of my blog

• make sure you’re up to date with a tetanus jab

• I always carry a small first aid kit with me in my rucksack – this wouldn’t have helped with my accident but I did once rush to the aid of a mudlark who’d cut themselves on a sharp piece of rusting iron scrap from an old boat. My first aid kit had clean surgical gloves, antiseptic wipes and plasters – all of which came in really useful that day. I’ve also completed a St John Ambulance training course which helped regarding basic first aid

• ensure you are fully aware of exit points from the foreshore

• don’t eat or drink on the foreshore. While it’s welcome news that the Thames is much cleaner today than ever before, there are still discharges of sewage taking place at various points and will continue to be so until Tideway complete their lengthy work upgrading new sewage systems to cope with the demands of modern London

• make sure you have a permit to search as it’s illegal to remove artefacts from the foreshore without one. Permits and other advice regarding staying safe on the river are available from the London Port Authority website (see the ‘Advice’ section on my blog)

Finally, happy mudlarking, stay safe, take care and I’m looking forward to being back on the Thames Foreshore soon. Time to end today’s blog as my feline physiotherapist has just arrived…