Two weeks ago the UK Government took its first step in permitting a gradual lifting of some of the Coronavirus pandemic lockdown regulations. This resulted in the Port of London Authority allowing a return of leisure activity such as boating and mudlarking on the Thames. However, even though some mudlarks have returned to the river, it’s still a little too early for me to visit the foreshore just yet. As I write this blog public transport remains only for essential use, and the infection rate of Covid-19 is still not as low as I’d like, so I’m going to wait a few more weeks before even thinking of resuming pottering about on the river. The Thames will still be there for me when I’m ready and in the meantime this has given me the opportunity to sort out and research a small backlog of finds made in January and February this year.

On my penultimate mudlarking session prior to lockdown, twinkling up at me from the mud and scrap of the Thames foreshore was a late 17th century trader’s token, made of copper alloy, and the fifth one of this type I’ve found so far. Minted post 1666, the year of the Great Fire of London, these tokens are always a delight to find and, unless in atrocious condition, usually end up being recorded on the PAS (Portable Antiquities Scheme.) They’re a mine of information for the historian as they give you so much detail – a trade, a name, a crest or symbol, the very street where the business was located. Tokens like this were once issued in lieu of change at a time when small coins were in short supply. Whoever had a token like this could exchange it for goods such as beer or bread, or services such as prostitution. I’ve yet to find a brothel token but these have been found by other mudlarks.

This particular one is a Tallow Chandler’s token issued by Thomas Giltman of Gosswell Street in Clerkenwell, a street which is still there to this day although now known as Goswell Street. I was particularly thrilled with this find as I’d discovered it on a part of the foreshore I hadn’t been to for some while and viewed by many mudlarks as not being worth searching. I’m glad I went back that day because I found some interesting objects. It goes to show how unpredictable the river can be with what it leaves behind at low tide.

The definition of what a Chandler does has changed over the centuries. Today it refers to someone who sells equipment for ship and boats, but historically it had two meanings; someone who worked in the wax and tallow business making candles (and soap) from the compressed fat of butchered animals, and also people who sold oil (known as ‘Oylemen’,) paint, household goods and groceries. Tallow Chandlery was especially important at this period in history when candles remained the only source of lighting dangerous streets and the home, pushing back the darkness and creating a small patch of light. There’s a sixteenth century meditation which says, ‘All would be horror without candles’ and this is difficult for us to understand when, thanks to electricity, we’re used to multiple lights coming on at the flick of a switch.

I’m grateful to the Worshipful Company of Tallow Chandlers located at 4 Dowgate Hill in the City of London who opened up their archives for me to search for Thomas Giltman and the history of some of their other members for this blog.

It appears Thomas Giltman wasn’t a member of the Tallow Chandlers Guild even though Gosswell Street was a veritable hub of Chandlers’ activity from medieval times to the 18th century, when their livelihoods were threatened and eventually destroyed by the inevitable coming of oil, lighting houses and streets instead of candles.

The Worshipful Company of Tallow Chandlers’ archives record four of their members living in Gosswell Street at the same time as Thomas Giltman – the sassy Mary Jackson, a ‘Corne Chandler’, who held her own in a trade dominated by men. It’s likely Mary took over the business of her husband on his death as this was the only way women could be admitted into a Guild at this time; Richard Norwood, an ‘Oyleman’; Edward Smith, a butcher chandler (the links between butchery and chandlery were close because Tallow Chandlers based themselves near butchers and abattoirs in order to have access to the fat of slaughtered animals); and Daniel Stepto, a Tallow Chandler ‘made Free’ (that is, he became a Freeman of the Guild) in 1747.

Gosswell Street would have been a filthy and stinking area to live and work in. Chandlers were often forced to move elsewhere when residents complained of the stench their trade was causing.

Today is also London History Day. I’m not quite sure who decides these things but there we are. It’s an opportunity however for me to share some of my favourite finds from the river with you.  The Thames has been London’s rubbish tip for millennia and the reason for the city’s very existence. Pottery, pins, pipes and other detritus have been thrown away or lost by ordinary folk whose names we mostly don’t know but whose stories live on in these objects. See how many items you think you can find in the photo below. 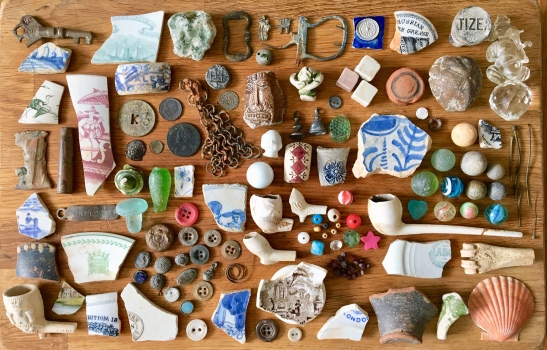 And on that note, I hope it won’t be too long before I’m back on the foreshore adding to my collection of mudlarking finds. I hope you all stay healthy and well over the next few weeks and months as we officially roll into summer.