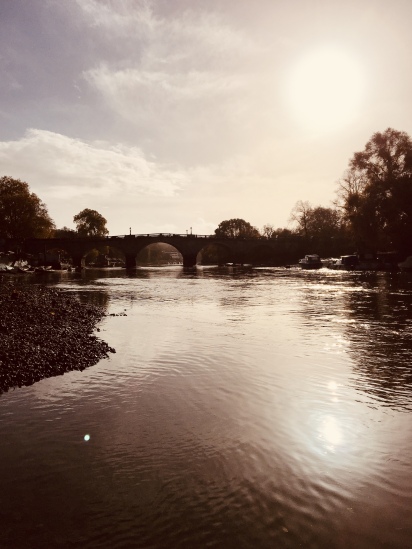 The first two weeks of November saw a continuation of above average temperatures and some spectacular autumn weather, the perfect background for visiting the Thames Foreshore during the annual Richmond Draw-Off. This takes place every year during the first three weeks of November and is when the London Port Authority lifts Richmond Lock and Weir in order to carry out vital repairs and clear out accumulations of sediment. At low tide this results in the river between Richmond and Teddington Locks looking as if someone’s pulled the plug. It’s a stunning sight. The annual Draw-Off also provides a welcome opportunity for volunteers to clear the river bed at Richmond, mudlarks and detectorists to chance their luck with finds in areas that aren’t normally accessible at other parts of the year, and for Thames Discovery to come down to do some vital monitoring of the structures on the foreshore here.

Thames Discovery checking out the low tide by the Georgian jetty.

So this was a great reason to stroll along the embankment from Twickenham to Richmond on a sunny November morning in order to join the Thames Discovery team, helped by the ever knowledgeable George from the Richmond Archaeological Society, for the annual monitoring visit.

The Richmond upon Thames area is rich in history and archaeology, though the archaeology tends to be less well known. In prehistoric times, mounds and caves stretched from what are now Richmond Hill and Richmond Park along the ancient embankment of the river, which was much wider than it is now. Archaeological finds from pre-history often turn up on the river foreshore during the Draw-Off period and George from the RAS had brought along some finds he’d made on previous November visits to the Richmond foreshore. These finds included a spectacular worked flint hand axe discovered in the river, and which is approximately a mind-blowing 43,000 years old.

The oldest and earliest flint hand tools date back even further into prehistory to approximately 700,000 BC although would have been found in what is now Ethiopia rather than the landscape of South West London as early man was not yet present on the European continent. The first people living in this area in prehistory would have used carefully worked flint tools to hunt mammoths, bison and reindeer. Ritualistic marks on human bones also found in this area from that time show evidence of cannibalism, ie that humans were deliberately and carefully dismembering other humans in order to eat them. It’s safe to say that cannibalism isn’t normally associated with the green, leafy and affluent landscape of South West London, but it’s always fascinating to add a touch of the macabre to South West London’s history.

Fossil finds are also reasonably frequent on the South West London foreshore and it’s always a pleasure to find a nice example or two. This year’s Draw-Off proved lucky for me when I found an unusual heart-shaped Echinoid, from the late Ordovician period, and a mind-blowing 400-450 million years old. We can never be a hundred per cent certain how fossils end up in the Thames as it’s possible they’re washed in from the South Downs via the Thames Estuary. Equally we know that they may be more closely linked to the Neolithic and other ancient settlements along the river in this area. Echinoid fossils were thought to contain magical and spiritual properties and often turn up at Neolithic burial sites. In the Middle Ages, Echinoids were known as ‘Faerie Loaves.’ 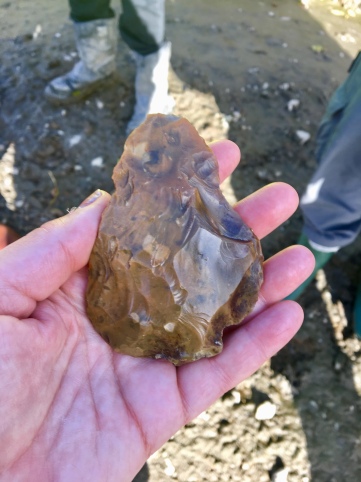 The current river embankment is man made and the subsequent dumping of hard core has resulted in a much narrower river that frequently floods at high tide. If you’re travelling in to Richmond by train or car you can often see flooded areas of grass adjacent to the Old Deer Park. It’s important to remember that, although sea levels are rising and therefore so are river levels, the flooding of Richmond Riverside is essentially the river returning to its natural and ancient embankment. If you’re familiar with the White Swan pub in Old Palace Lane you might not know that this was the original site of the moat from the old Tudor Palace. 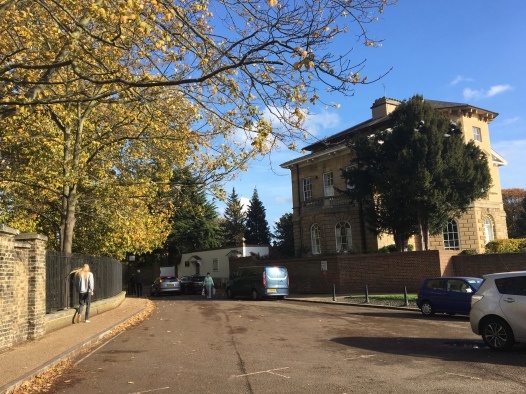 The demolition of Richmond Palace, and its subsequent loss to history, was a huge shame. Henry VII built Richmond Palace on the site of the former Palace of Shene which was badly damaged by fire in 1497 when the King was there to celebrate Christmas. Inevitably after the fire Henry wanted to rebuild the palace. The Royal Apartments had been situated in the Privy Lodgings area, the side that faced the river, and it’s thought that much of this area escaped the inferno so the same ground plan was incorporated in the new design.

A bridge over the moat, surviving from Edward III’s time, linked the Privy Lodgings to a central courtyard , flanked by the Great Hall and the Chapel. The Great Hall was built of stone, roofed with lead and supported on an undercroft used as a buttery and offices. The Chapel, also of stone, was decorated in ornate style. Underneath it were the wine cellars while above was a floor devoted to rooms for court officials. The Chapel’s ceiling was of a chequered timber design, the plaster decorated with roses and portcullis badges.

The gate opened up into the Great Court which had red brick buildings on the east, west and north sides. These included the palace wardrobe where the soft furnishings were stored. It was essential for the Monarch to travel regularly from palace to palace, or other grand residence, on Royal business and to show himself to his subjects. As the King did so his soft furnishings – tapestries, furniture, paintings and other decorative, portable items – would travel with him. The photo below shows the palace wardrobe area today. 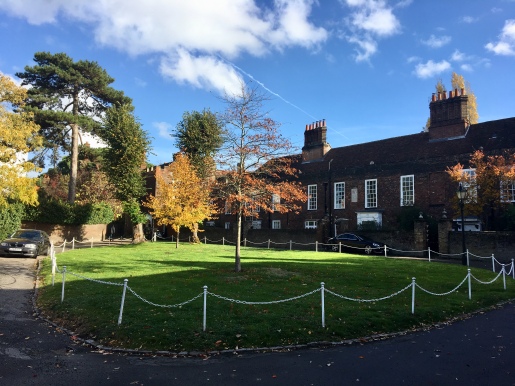 The area formerly known as the Palace Wardrobe.

In 1501, Henry VII, having ‘rebuilt it up again sumptuously and costly….’decided to change the name from Shene Palace to Richmond. The reason for the change of name is thought to have been because both he and his father had been Earls of Richmond (in Yorkshire.)

For a brief, glorious time, Richmond Palace was one of the palatial stars of the Kingdom. The wedding celebrations of Prince Arthur, Henry VII’s eldest son, to Catherine of Aragon took place at Richmond, as did the engagement of Princess Margaret to King James of Scotland in 1503. Henry VII himself died here on 21 April 1509, as did Elizabeth I on 24th March 1603. Richmond was thought to be Elizabeth’s favourite palace.

Henry, who had unexpectedly found himself king as Henry VIII on the untimely death of his older brother Arthur in 1502, (possibly from bubonic plague), married his brother’s widow, Catherine of Aragon, and in 1510 Catherine gave birth at Richmond to a son, also called Henry, but who sadly died a month later. Catherine gave birth to only one surviving child, Princess Mary.

Henry VIII preferred to spend much of his time in the bigger Hampton Court Palace, further upstream and originally built by the ambitious Cardinal Wolsey for himself, so Richmond eventually became a home for discarded queens – first Catherine and her daughter Mary, and later it was given to Henry’s fourth wife, Anne of Cleves, as part of the canny Queen’s divorce settlement.

Both Mary and Elizabeth, the daughter of Henry’s second wife Anne Boleyn, made more use of Richmond during their reigns. Elizabeth adored Richmond as her winter home, probably in large part due to the fact its compact design made it easier to keep warm, no mean feat where draughty stone palaces were concerned. Elizabeth enjoyed having plays specially performed for her at Richmond, especially by the company of actors that included William Shakespeare as a member. It’s perfectly possible therefore that Shakespeare himself may have visited Richmond in order to entertain the Queen.

When the Tudor Dynasty ended due to lack of a direct heir (Elizabeth never married), James I of the House of Stuart and the Queen’s closest relative, was next in line to the throne. James I gave Richmond Palace to his eldest son, Henry Frederick, Prince of Wales, whose mother was Anne of Denmark. A talented, sporty and clever young man he was predicted to be a great King. However fate had different plans for him and sadly he died on the 6th November 1612 at the age of 18 having unwisely gone swimming in the freezing Thames at Richmond, contracting a severe fever which it’s thought then morphed into typhoid. His brother, Charles, stubborn in character and unsuited to ruling, became King instead and ascended the throne as Charles I. Charles expressed little interest in improving and enlarging the palace although it remained a popular home for the Royal Children until the Civil War. After Charles I’s execution in 1649, the Palace was sold on the orders of Oliver Cromwell. Some of the buildings survived but sadly the Chapel, Great Hall and Privy Lodgings were demolished and the stones sold off or thrown into the river.

What was left of Richmond Palace was leased out to various people and new houses were built, many of which can be seen today, to replace the crumbling and old brick buildings. The front facing the court still shows Tudor brickwork as does the Gate House (see photo below). ‘Maids of Honour Row’ replaced most of the buildings facing the Green, and most of the house now called ‘Old Palace’ was rebuilt in 1740. Old Palace Yard survives as the name of the road leading up to the Gate House. 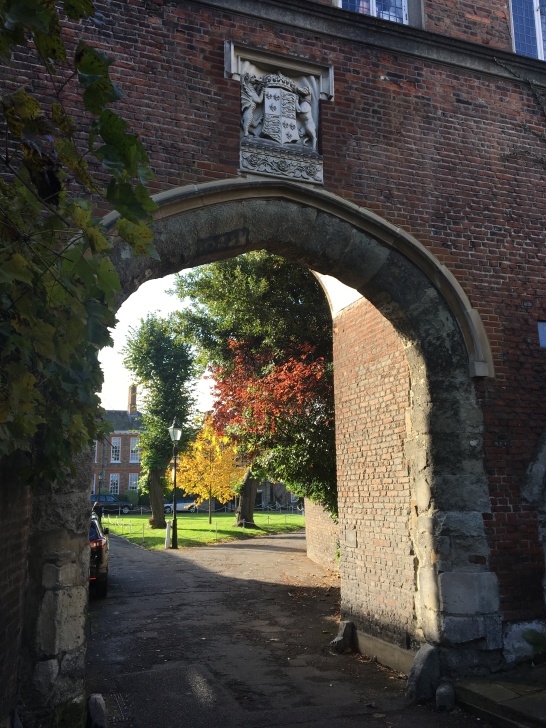 The Richmond Draw-Off has resulted in some splendid and rare finds from the Stuart period of history. A thrusting dagger, known as a ‘dirk’ or ‘bollock dagger’, for obvious reasons, was found on the Thames Foreshore by a member of the Richmond Archaeological Society. The handle is a new one based on the design of the Stuart period, the blade is original. 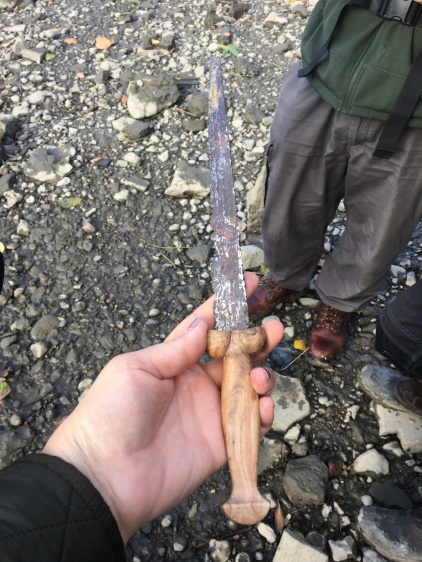 A Stuart ‘Dirk’ found by the Richmond Archaeological Society

Also found on the Thames Foreshore during the Richmond Draw-Off by the RAS, is this  very early and beautiful sherd of stoneware pottery, possibly from 1700, and showing an image of Queen Anne, last of the Stuart Dynasty, second daughter of James II and his wife Ann Hyde.

Stoneware from 1700 showing an image of Queen Anne

The November Draw-Off reveals other things that aren’t normally visible at other times of year. On our recent monitoring trip it was good to see this beautiful eel. The poor thing was literally drawing its last breath as we carefully approached to check it out, probably exhausted by both spawning and its mammoth journey from the Sargasso Sea all the way to South West London. The good news though was that the sight of the eel is evidence of the improved cleanliness of the Thames. Long may this continue.

Rivers have been linked to various religious rituals throughout history, even used as burial sites in the past. Hindu offerings, such as the ones in my photo below, turn up frequently on the Thames Foreshore and we always leave them where we find them.

Hindu Offerings on the Richmond Foreshore

The 2018 November Draw-Off has now come to an end and the foreshore is no longer so visible at low tide. The end of our monitoring visit this year ended on Richmond Green, beautiful and golden in the late autumn sunlight.

So, bidding you a fond farewell from the Richmond Foreshore until next year. See you all in November 2019 to see what treasure the Thames will be generous enough to show us. 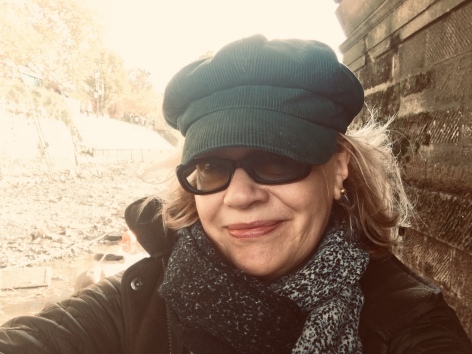 One thought on “Richmond Draw-Off”