For this, my last mudlarking blog of 2018, I thought I’d write about something that was inspired by a weekend of talks I recently attended celebrating ten years of the Thames Discovery Programme, an organisation under the umbrella of MOLA, Museum of London Archaeology, and whose work focuses on monitoring and recording the archaeology of the tidal Thames Foreshore at low tide. During the course of the talks, one of the speakers, who was talking about famous foreshore antiquarian finds from the past, mentioned ‘The Golden Age of Mudlarking.’ This ‘Golden Age’ usually refers to the 19th Century, when antiquarians paid dredgers, labourers and others widening the Thames and building the new Embankments during the Victorian period, to find and look for important historical objects from the past. One of the many marvellous finds from this so-called ‘Golden Age’ was the famous Battersea Shield, now on display in the British Museum although an excellent copy can be seen in the Museum of London.

The next ‘Golden Age’ of Mudlarking came in the 1950s and is often referenced by the great archaeologist Ivor Noel Hume in his iconic book ‘Treasure In the Thames.’ This was an inevitable result of a period when London was recovering after the Second World War and many new archaeological and antiquarian finds were being discovered both on the Thames Foreshore and at excavations of bomb damaged buildings during the rebuilding of the capital. Ivor Noel Hume walked along the Thames Foreshore in the City of London and noted the large numbers of artefacts he discovered between Southwark and London Bridges, spanning Neolithic, Roman, Saxon, Viking, Medieval, Tudor, Georgian and Victorian times. Literally millennia of London’s history as seen through the prism of mudlarking finds.

Which brings me back to the Thames Discovery Tenth Anniversary lectures and the mention of recent spectacular and hugely significant mudlarking discoveries. From Medieval pewter pilgrim badges, to Roman pins, Roman oil lamps, rare Saxon coins and so much more. These are indicative of a new Golden Age of Mudlarking, which is a highly apt description as we’re experiencing yet another explosion of both mudlarking and metal detecting on the Thames Foreshore. And it’s this that made me want to start a little series of blogs about the modern mudlark, to look at what drew them to mudlarking and why mudlarking inspires them. So, with this in mind, I’m introducing you to number one in this series – my mudlarking friend, Fran Sibthorpe.

Fran’s first ever visit to the Thames Foreshore was in 2005 when, on an evening out with friends, they ventured down a small passageway by the side of a London pub and found themselves at steps leading down to the river. The tide was out so of course it was the perfect opportunity to explore further. Walking along the gravel and sand, inevitably the urge to pick up fragments of pottery was quite great and, like many mudlarks before and since, Fran found herself hooked on mudlarking. Attracted to the water from childhood mudlarking was a natural progression.

Life can have other plans for you at times and, shortly after, Fran found herself busy with many other projects and calls on her time so she wasn’t able to return to mudlarking until some time later when, working for a charity in the East End of London, she came back to the foreshore and began to mudlark more seriously, this time focusing on recording and researching her finds, and obtaining her London Port Authority ‘permit to search’ in December 2017. The permit is a legal requirement for anyone wishing to mudlark or detect on the Thames Foreshore. 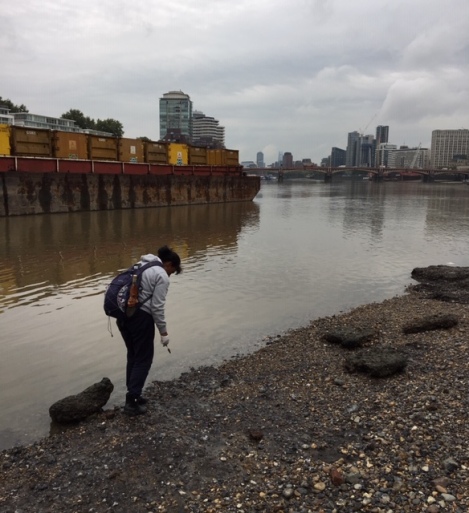 Mudlarking for Fran is a highly enjoyable hobby. The whole experience of walking slowly, searching, looking for interesting shapes, metals, textures and other potential finds, eyes peeled and head down, is one that many mudlarks will recognise. Fran’s personal motto when out mudlarking is to “expect the unexpected.”

In addition to searching for historical artefacts, Fran is also keen on photographing and filming her finds before writing about them within the context of the history of the foreshore where they were found.

On one memorable occasion Fran was so absorbed in searching a particular area of the foreshore that she found herself completely surrounded by a large flock of Canada Geese. Such are some of the ever present dangers that are faced by the modern mudlark.

Sometimes the Thames Foreshore can be one of the quieter places in London and perfect for escaping the pressures and stresses of modern life for a couple of precious hours. Fran believes that these unhurried, contemplative times enhance the sounds of the river and accentuate the moments when you hear broken glass rolling with the water as a wave crashes onto the shore, or sherds of pottery being dragged across the gravel making its own unique sound. These can be very special, a time of stillness amid the ever present bustle and hum of the busy City above the Embankment.

Fran is an ‘eyes only’ mudlark and has made all her finds by careful searching rather than using a metal detector. She is a big presence on Instagram and can be found at @franjoy7 where she posts photographs and short films of her finds. Instagram is a useful resource for mudlarks and Fran appreciates the knowledge of others who will often chip in with information and identification when she’s unsure of the provenance of a particular find.

Mudlarks are very selective about what they take and what they leave behind on the foreshore and Fran is no exception to this, often bringing back finds that she no longer has room for. Like many experienced mudlarks she has frequent appointments with the Finds Liaison Officer (FLO) at the Museum of London, as it is a statutory requirement of every permit holder to report any finds that are particularly valuable or over three hundred years old. She has recently presented the FLO with a seal matrix inscribed with the initials ‘GM’, surrounded by leaves, an unusual floral clay marble, a rare silver hammered Elizabethan coin and an East India Company (EIC) trading token. Fran will eventually get these back once they’ve been formally identitifed and recorded with the Portable Antiquities Scheme (PAS.)

This year, 2018, has seen the launch of Fran’s first mudlarking book called ‘Curios Of The River Thames Foreshore.’

‘Curios’ is a beautifully presented photographic notebook that groups some of Fran’s favourite finds together (much like the river does when it deposits particular types of finds by weight on the foreshore) yet also has plenty of space between the photos which allows you to research, sketch or draw your own finds too. It’s a great addition to any mudlarking library, especially as there are still far too few books by and about modern mudlarks.

Fran’s book can be brought directly from her own website which is located at – http://www.fran-joy.london 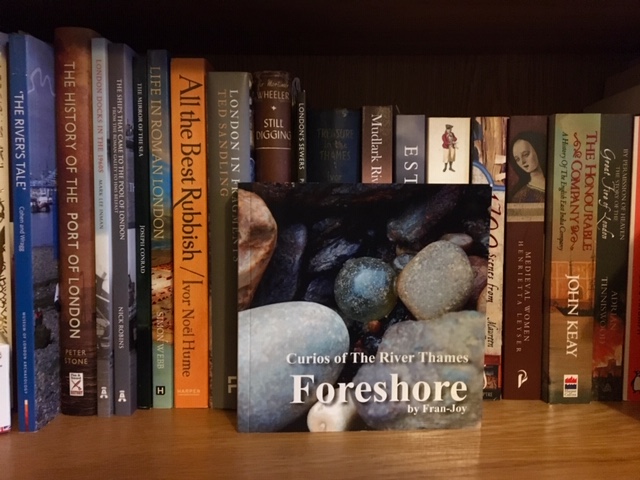 So, signing off with this my last mudlarking blog of 2018, and wishing you all a very peaceful and healthy new year. Happy Mudlarking in 2019!