A new year and my first blog of January is inspired by the initials A.B.C. No, not the excellent adaptation of the famous Agatha Christie thriller ‘The ABC Murders’ broadcast over Christmas, but an exploration of the story behind these two porcelain sherds I found close together under Waterloo Bridge at the beginning of last year. I haven’t blogged about them yet so now would be a good time to do so as they reveal a fascinating aspect of late 19th and early 20th Century social history. 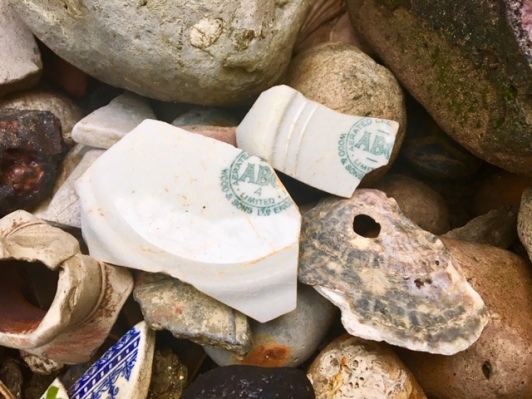 The initials A.B.C stand for ‘The Aerated Bread Company Ltd’, founded in 1862 by Scottish medic and chemist, Dr John Dauglish, quickly becoming a large and profitable business empire comprising bakers, confectioners and tea rooms. It’s relatively easy to find references to this company online but I’ve tried to search for primary records, which have been much harder to locate as they were destroyed or damaged by flooding. The London Metropolitan Archives in the City of London hold some of the few surviving records, found in an abandoned factory once owned by the company in Camden Road.

The secret of the success of The Aerated Bread Company began with some early experiments Dr John Dauglish carried out to improve the speed of the bread making process. Traditional bread making involves the use of a raising agent (yeast) which has to be added carefully to flour and then the mixture left to rise before kneading and finally baking. This is a lengthy procedure particularly when scaled up for commercial reasons.

Dauglish used his knowledge as a chemist to invent a new method of raising bread without the use of yeast. This involved introducing carbonic acid gas, essentially carbon dioxide dissolved in a solution of water, into the bread mix to kick-start the leavening process. The resulting bread was similar in taste and texture to the ‘Mother’s Pride’ style white bread we have today; lacking taste and texture, but cheap and fast and easy to mass produce. It quickly became very popular.

In 1862, the first Aerated Bread Company bakery opened in Islington and then later moved to Soho at the turn of the century. The first tea room opened in Fenchurch Street Railway Station in 1864. By 1923 it had 150 branch shops in London and 250 tea rooms, easily rivalling the equally popular Lyons Corner House tea rooms although the Lyons branches were more upmarket and better managed. Eventually the Lyons tea rooms had overtaken their Aerated Bread Company rivals but, at the height of their popularity, A.B.C. opened branches as far away as New York, Chicago and also Australia.

The success of the first Aerated Bread Company tea rooms was based on affordability and also the introduction of an element of self-service, even though the earlier ones still had waitress service. The menu below from 1900 gives an indication of the cost of products and the basic essence of what was to morph into the first ‘greasy spoon’ cafés with their wide range of baked goods and teas. 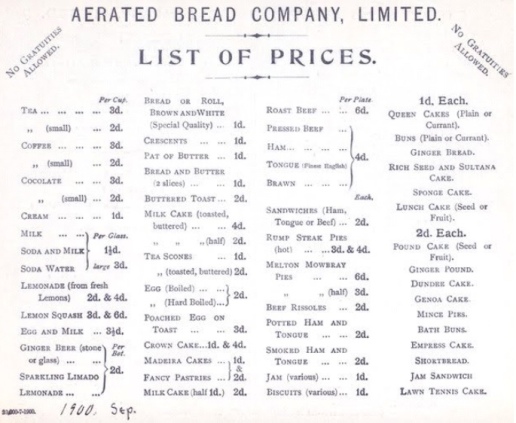 The social importance of The Aerated Bread Company in the lives of women can’t be underestimated. They were the first tea rooms where women could go to eat a meal, alone or with women friends, without a male chaperone although it’s not without a hint of irony that I note the proliferation of moustachioed gents in the vintage photo of  the Ludgate Hill branch of the A.B.C tea room below. They became known as safe havens for unescorted women from the late Victorian period onwards and were also recommended as eating places to the delegates of the International Council of Women, held in London in the week beginning 5th July 1899.

Many Aerated Bread Company tea rooms often had a women’s social club located on the floor above, thus providing a safe space for a new wave of feminist organizing and later used as the base for meetings of Suffragettes and Suffragists. The New Somerville Club, close to Oxford Circus, was one such social venue located over the Aerated Bread Company at 2, Princes Street. The social club were vocal in their support of the female employees of the A.B.C. and complained on their behalf, challenging the early inequality of the company for not sharing its huge profits with the women who worked long hours serving customers and cooking the food. However, this did not stop the female members of the Somerville from getting meals from The Aerated Bread Company sent up to the general room above during meetings. Men were occasionally admitted to this club as guests. 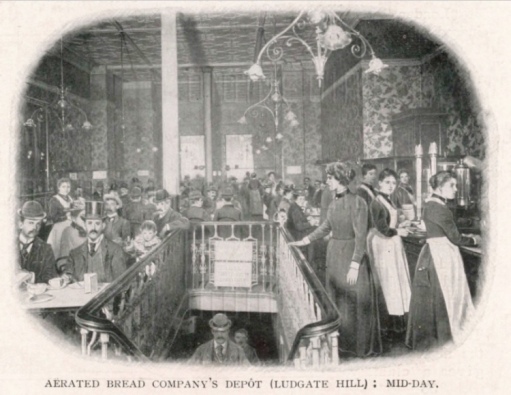 The Aerated Bread Company reached its peak in the mid 1920s with only Lyons having more branches. By now they were found all over London, from Aldersgate, Cannon Street, High Holborn, Cheapside, to London Bridge, Piccadilly, Pall Mall, Westbourne Grove and Kensington High Street. Interestingly, I found my fragments of  ‘Aerated Bread Company’ crockery not far from Waterloo Bridge even though there was never a branch at Waterloo Station, the nearest one to the location of my find being at Victoria Street, Westminster or Westminster Railway Station. As with so many mudlarking finds one can only speculate how they ended up being dumped in the river and, since I found these pieces, I haven’t found any more on this particular stretch of the river. 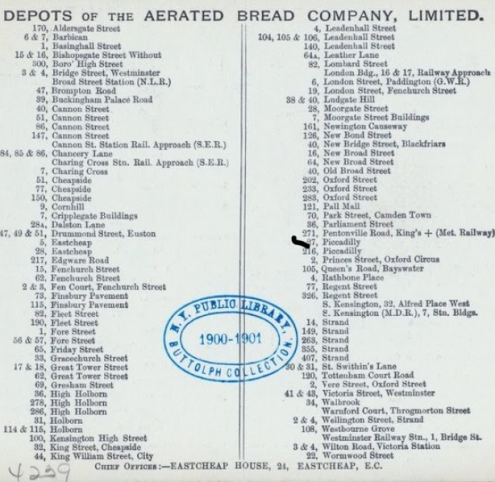 In 1955, many aspects of the Aerated Bread Company were no longer profitable and tastes had begun to change. The Australian branch of the company went into liquidation in 1951 and a few years later the entire company was taken over by Allied Bakeries (owned by Canadian-born Garfield Weston) in 1955, eventually becoming a subsidiary of Associated British Foods Ltd, which it’s thought ceased trading in the early 1980s.

Not everyone was a fan of the Aerated Bread Company tea rooms. George Orwell loathed them and famously described them as a “sinister strand in English catering, the relentless industrialisation that was overtaking it: the 162 tea shops of the Aerated Bread Company….which rolled out 10 miles of swiss roll every day and manufactured millions of “frood” (frozen cooked food) meals, the milk bars that served “no real food at all….everything comes out of a carton or a tin, or is hauled out of a refrigerator or squirted out of a tap or squeezed out of a tube.”

However, in contrast, they were much loved by George Bernard Shaw. Shaw, a vegetarian, wrote about his daily visits to restaurants and cafés in his diaries, particularly volume 2, and appears to have found very few problems in his search for vegetarian food in London. On the 12th December 1888 he wrote the following entry: “….to the Aerated Bread Shop opposite the Mansion House station and had some eggs and chocolate there.” On 27th January in 1891, Shaw wrote about a visit to the Aerated Bread Company tea room at the corner of Parliament Square in the company of Florence Farr Emery. He was also a frequent visitor to the A.B.C. tea rooms next to Charing Cross Station, Oxford Circus and Piccadilly Circus. His diaries feature frequent references to having eaten and enjoyed such things as lots of fried or scrambled eggs, cheese (macaroni cheese being a perennial favourite), milk, cream, butter, chocolate, sweets, ginger beer, lemonade, unspecified soups, plus cakes and buns. There were only the occasional mentions of fruit, nuts, brown bread, porridge, rice or lentils so although his diet was unquestionably meatless, I’m not convinced it was particularly healthy.

On 5th March 1933, T.S Eliot wrote to Virginia Woolf from America and described a restaurant in Los Angeles called The Brown Derby, which he noted “seems just as normal as an A.B.C.” He also mentioned The Aerated Bread Company tea rooms in his poem called ‘A Cooking Egg.’ ‘Virginia Woolf herself mentions the tea rooms in her novels ‘Night and Day’ and ‘Jacob’s Room’.

Other notable references of the A.B.C tea rooms in literature can be found in Agatha Christie’s ‘The Secret Adversary’, Graham Greene’s ‘The End Of The Affair’, ‘Cakes and Ale’ by Somerset Maugham, ‘The Old Man In The Corner’ by Baroness Orczy, ‘Dracula’ by Bram Stoker and ‘Asta’s Book’ by Ruth Rendell writing as Barbara Vine. 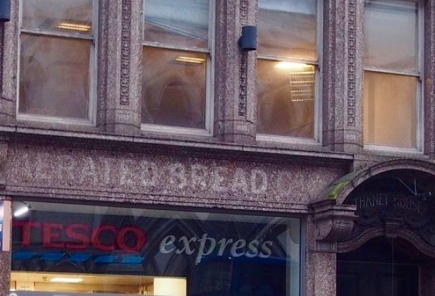 Today the Aerated Bread Company only exists in vintage photos or sketches, a small selection of documents, a sherd of pottery washed up at low tide on the Thames Foreshore and as the occasional ‘ghost’ sign. When you’re walking about in London do remember to look up from time to time as there are still whispers of the past visible in the façade of public buildings. And if you’re ever walking down Fleet Street, you’ll see this fading remnant advertising the glory days of The Aerated Bread Company.

16 thoughts on “The Aerated Bread Company”